Lampreys – Aliens Of The Deep 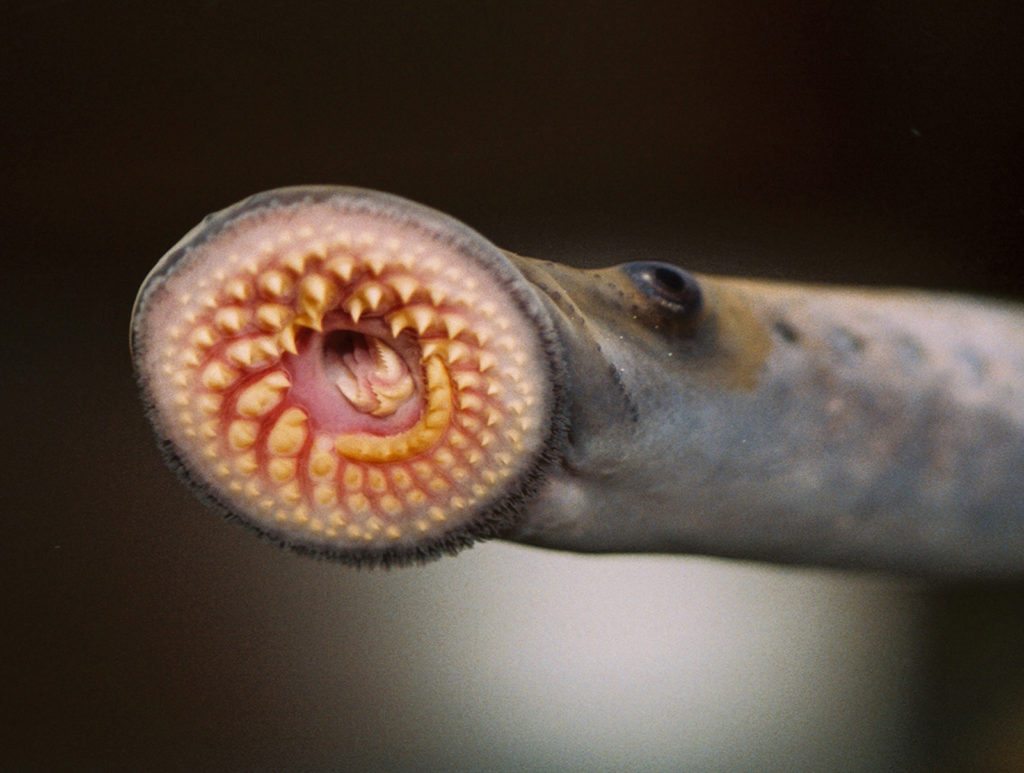 They’re the extraterrestrial-like monsters roaming our rivers and seas. We go inside the secret lives of ancient water creatures that have existed for 360 million years.

Armed to the Teeth: In place of a mandible, the animals have an oral suction pad, a sharp rasping tongue and rows of keratin teeth. Native to the Atlantic Ocean and the Baltic, Mediterranean and Adriatic seas, the eel-like fish also invaded the Great Lakes in the early 20th century via canals. They’re also found in the waters off southeast and southwest Australia.

Rasp Tool: The central, 2cm-long tooth of a lamprey is shaped like a W and acts as a perfect rasp tool. It uses it to abrade its way into the tissue of its victim. Once in, it emits a mucus to stop the prey’s blood from clotting.

THE ANATOMY OF A LAMPREY

At first glance lampreys look very similar to eels, but in reality they are just as distantly related to them as they are to mammals. Strictly speaking they’re not even related to fish. Lampreys are the only survivors of an ancient evolutionary line of vertebrates – cyclostomes that are marked by their lack of a jaw. The lamprey family consist of three sub-types, nine genera and 40 species: the pouched lamprey is found off both the southeast and southwest coasts of Australia.

In folklore lampreys are often referred to as ‘nine-eyed eel’ after the seven external gill openings found on both sides of their heads alongside a nostril and an eye. The long body has no fins, but is equipped with a fin-like fringe. 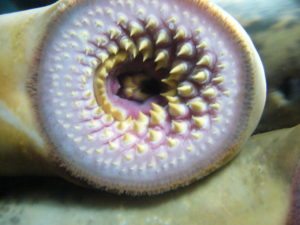 THE SECRET OF SUCTION

The suction-cup-like mouth is fringed with delicate fimbriae. These cling to the skin of the host, forming a vaccum so strong it allows the parasite to hold up to 300 times its own body weight.

A TOOTH FOR A TOOTH

The suction pad sits in the middle of a circle of larger teeth. The largest three, which surround the inner mouth, are also bicuspid (i.e. they have two cups). The opening of the mouth is flanked by circular rows of smaller teeth.

The nine-kilo salmon wants to escape. But its pursuer, despite being physically inferior, cannot be shaken off. Like a sniper with a laser designator, the lamprey lines up its prey. To do so it uses cells along its body that perceive vibrations in the water. As soon as it senses its prey is nearby, the lamprey switches to visual flight mode – and clamps itself to the flank of the fish. Once it locks onto its host any opportunity for escape is long gone. 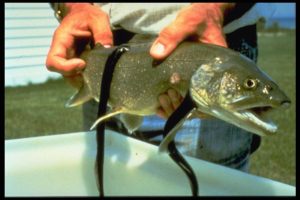 The blood-sucking, jawless lamprey has been using this hunting strategy for 360 million years – it’s one of evolution’s success stories. Using a large oral sucking disc, the eel-like hunter generates a pressure so extreme that it surpasses even high-tech vacuum systems – it’s the most efficient suction pad found in nature.

Meanwhile, the outer edges of the mouth are studded with frond-like fimbriae that cling to the prey’s skin, making a perfect, airtight seal. Beneath its high-performance suction cup. the ancient vampire hides another special characteristic: several dozen keratin teeth of differing sizes, ready to tunnel into the flesh of the host. The central fangs of the 1,2-metre-long lamprey are shaped like a ‘W’; two teeth move left and right, and a longer tooth up and down. The lamprey uses these and its abrasive tongue to chew through the scales of the host fish and begin feeding on its blood.

And that’s how the salmon’s battle ends. Sucked dry. After two days it sinks to the bottom of the riverbed – with a five- centimetre hole behind its head.

3 thoughts on “Lampreys – Aliens Of The Deep”