Dragonflies are best known for their amazing colours and their incredible flying speed. If you’re lucky enough to see one, it’ll only stay still for a few seconds. It’s a method that has worked for these insects for over 300 million years, as dragonflies evolved even before the dinosaurs. Fossil records show that some ancestral species of these ancient insects had wingspans of over 70 centimetres (two feet), claiming the title of the largest insect ever. Today, there are more than 5,000 species of dragonfly worldwide, but just 36 are in the UK. The largest species is t 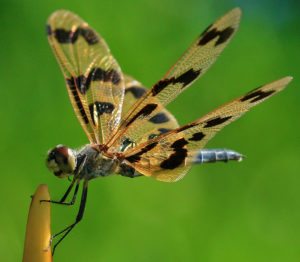 he hawker dragonfly of the genus Aeshna. These beauties have long tapered abdomens with a strong and muscular thorax: and sport some flashy colouring. The southern hawker dragonfly can be found flying around heathland and woodlands, particularly in the south of the UK. It is mostly black, but has spots of shocking lime green along its long body to complement its highly sensitive blue-green eyes.

As with many dragonfly species across the globe, the males pf this variety are much more pigmented and vibrant than the females – this is to show off when it’s mating season! Southern hawkers reach their adult stages in the warmer months between June and September every year, and the territorial males will show off their impressive tints to any would-be challengers at the water’s edge. When it comes to a mid-air dragonfly dogfight, the contenders have one extra party trick. These insects are able to utilise in-air camouflage to outwit opponents and assailants, and most of all, to sneak up on prey. They-do this by constantly adjusting their position so that: they always occupy the same spot in the prey’s retina – making them look stationary while they are actually moving in for the perfect stealth attack. Even if their target realises the danger they are in, it’s often too late. Some dragonfly species have been known to take down prey as large as hummingbirds!

However, despite amazing flying and hunting abilities, the bright colours of dragonflies pan also draw unwanted advances from predators. As a big insect they are a hearty meal for the fastest hunters. Birds such as kestrels and swallow’s have been known to hunt down a dragonfly, as well as some plucky fish species that leap out of the water to snatch a dragonfly that strays too close to the surface.

The larval stages of dragonflies are almost always lived out in freshwater ponds and lakes, where they hunt constantly, using their eyes as their secret weapon. But in true dragonfly style, there are exceptions to the, rule. Very few insists are, able to live in the ocean, but the coastal dragonfly species known as the seaside dragon let is one of them. This dragonfly prefers seawater and salt marshes, and is able to lay its eggs in salty, brackish water. Dragonflies are Truly incredible insects, so read on to discover more about these ancient and aerodynamic bugs.

PrevPREVThis Is How We Can Actually Save Otters
NEXTWhy Are Dogs This Loyal To Humans?Next