The dark king cobra crawled over wet, speckled tree roots. A 60cm-long Malabar pit viper made a break for it, but it was too late. The much larger, 3 m-long snake caught up in an instant and grabbed it. Struggling to escape, the viper plunged its long retractable fangs into the cobra, which let go and sat as if stunned, getting drenched in the torrential rain. Without losing a moment, the viper made good its escape. It swam across a forest stream and lay still, blending among the tree roots. As long as the pit viper didn’t move, the king cobra couldn’t spot it. The dazed predat 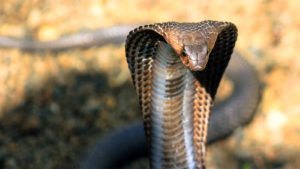 or stared blankly and he didn’t flick his tongue. The pit viper had won a rare reprieve from this famed snake-eater – the world’s longest species of venomous reptile that can measure up to 5.5m nose to tail (even longer specimens have been claimed). Minutes later, however, the cobra came to and his tongue darted on the wet leaf litter.

Following his prey’s scent trail, he dived into the stream and searched underwater until he realised he was on the wrong track. Flicking his tongue on the water surface, he finally found the scent trail – a feat beyond dogs’ capabilities. Even though the viper was visible close, the cobra trusted his keen sense of smell more than his sight. The predator was almost on top of his prey when it flinched and the game was up. The king cobra clamped his jaws on his struggling prey and dragged it underwater. Holding his breath, he drowned his envenomed victim. When it went limp, he came ashore to swallow it.

Throughout the 2008 monsoon, researchers at the Agumbe Rainforest Research Station in India’s Western Ghats observed this king cobra eating 26 pit vipers over 140 days. It sounds a lot, but these serpentine noodles were so small that together they weighed no more than a single rat snake. For his size, the cobra needed to put away the equivalent of at least two rat snakes a month, nearly 30kg a year, yet he didn’t seem to be suffering from the meagre diet. They are virtually exclusive consumers of snakes – occasionally they eat monitor lizards, but make no further concessions to their diet. One was even observed peeling a road-killed Forsten’s cat snake, which was buzzing with flies, off the tarmac before swallowing it.

The pit viper-eating habits of that king cobra surprised the researchers. They thought he would find a sheltered spot to wait out the rains and perhaps not eat much until the weather lifted. Agumbe, in the south Indian state of Karnataka, receives 7m of rainfall a year; in some years westerly winds blowing off the Arabian Sea dump as much as 11m. In an average monsoon rains don’t let up for three months. The deluge cramps the activities of most mammals and birds, but reptiles and amphibians thrive. Throughout most of the year, king cobras live a solitary existence within the confines of their home ranges. The pit viper-eater that the researchers were following had staked out a 15km2 chunk of forest for himself, while another lived in 30km2 of farmland, preferring larger meals of rat snakes and spectacled cobras. Within their domains each snake had its favoured hide-outs, such as termite mounds, canebrakes and burrows.

They seemed to have a map of the local terrain in their heads, making for these spots to digest their meals, shed their skins or shelter for the night. Although the ranges of king cobras often do overlap, they tend to avoid each other. In captivity keepers house king cobras separately because, given a chance, they will eat smaller members of their own species. Evolution had a solution for this problem, however. King cobras in Agumbe change colour during the breeding season. The front half of males turns lighter so the yellow bands become indistinct. Females become darker, with their golden yellow bands standing out prominently. Perhaps this colour coding helps them recognise males from females, and females from prey. Another, more critical, adaptation deals with the potential for cannibalism directly.

King cobras go off food during this period. The urge for sex suppresses their appetites. Our pit viper-eater crawled 14km in search of a female. When he found her holed up in a burrow one evening, he didn’t barge in. He slept outside in the open through the night. But the next morning, before he could make any overtures, another male showed up. The rivals engaged in a duel, testing which one was the better male. They coiled around each other and tried to slam the other down, performing a ritual combat dance. Despite their arsenal of potent venom and vice-like jaws, the adversaries kept their mouths shut; the combat was a test to prove muscular strength and stamina. An hour later, the pit viper-eater conceded defeat and the victor chased him away. This was a typical encounter between two male king cobras.

Researchers at Agumbe observed extremes of behaviour. On one rare occasion, the victor and defeated got along famously after a wrestling bout, and mated with the same female. But king cobras can get their wires crossed to deadly effect: hormones don’t always keep their mouths snapped shut. Once, before a weaker rival could give up and escape, his stronger 4m-long opponent killed and swallowed him. The fighting took place in a cowshed and, during the fierce battle, one of the snakes bit a buffalo calf. Within 20 minutes the young bovine lay dead. Most combat between males happen in a female’s presence but in this instance, except for a crowd of horrified people, there were none about.

Perhaps the impulse to eliminate the competition overrode the desire to seek a mate. It was the only instance observed by researchers of a wild male king cobra cannibalising another male. For years in Agumbe, spooked villagers called snake catchers to remove king cobras from their gardens and farms. After inserting a radio transmitter into the body cavity of one such cobra, the researchers released it more than 40km away from the capture site. For nine months, he roamed without direction, covering 83km – possibly a world record for snakes. Unlike the other two king cobras that lived in one area and frequented the same spots, this one kept crawling onward, not visiting a location again.

Instead, the cobra researchers offered to watch any snakes until they left villagers’ gardens. So when they were called by the family in whose backyard the ‘cosy’ cobra couple had taken up residence, the snakes weren’t marked or tracked by radio transmitters. The snug scene of the king cobra couple was disrupted by an intruder another male issued a challenge to the resident. The researchers couldn’t identify the rivals for certain, as the two duked it out, but believed it was the intruder who won. The victor then approached the female, who was already heavy with eggs, and began courting her.  She responded by holding her head close to the ground, and spreading her hood to show off her yellow chevron marking Coils of her body covered her head, flashing the bright yellow bands. This was typical female behaviour when a male king cobra shows interest. In this case, though, the male abruptly switched from courtship to predation.

He grabbed the female’s neck in his strong jaws, crushing her windpipe. The smaller snake thrashed and struggled. Her body pulled backwards but the male’s hold didn’t slacken. She spun her body along its length the way crocodiles do to dismember their prey. Unlike the cobra previously described, that seemed to be stunned by the venom of the lightweight pit viper, this female appeared to be immune to the venom of her own species. Although the male chewed his venom into her, it didn’t seem to have immediate effect, and it took nearly an hour of frenzied fighting before she finally went limp. The researchers were puzzled. Why did the male kill the female? Was it a case of mistaken identity? He knew she was a female is mammalian behaviour rather than that of reptiles. Besides, killing a female in her prime doesn’t seem like a reasonable reproductive strategy.

The breeding season was drawing to a close. Perhaps the hormones that make king cobras lose their appetites were on the wane and the male was ravenous. He attempted to swallow his prey, but when he reached her swollen belly, he regurgitated, left her carcass and crawled away. Had he been famished he would have swallowed her. Perhaps her girth was too much to handle? This action echoed a similar case earlier in the breeding season when the female in question wasn’t pregnant. Researchers don’t yet know if such cannibals are repeat offenders, or whether specific circumstances trigger this behaviour. King cobras are not exceptional – they are one among more than 100 species of snakes known to be cannibals. But the painstaking observations carried out at Agumbe show just how much fascinating snake behaviour we have yet to unravel, even in relatively well-studied species such as the ‘king of snakes’.