Why Should It Matter To All Of Us To Hear Birdsongs?

When I was a teenager, I was fortunate to learn the songs and calls of many of our British birds, as I was asked to take on the Common Birds Census for Edgbaston Park in Birmingham. For some years our school natural history society had been running the British Trust for Ornithology (BTO) survey on the adjoining nature reserve, only a mile or so from the city centre. As a school club set up by, among others, renowned birder, conservationist and TV personality Bill Oddie, it relied on new generations of surveyors to keep the annu 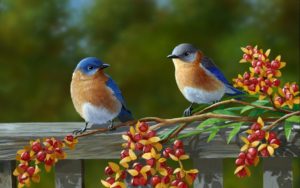 al scheme running, and I was the latest in a long line. When I was learning about that first census from my predecessor, I found some of the calls confusing. Interestingly, these calls turned out to be the ones that caused me trouble when I started to lose some of my hearing ability 45 years later.

It had been getting harder to pick out birds and identify individual calls, so I finally gave in and had a hearing test. I discovered that the 4 kHz part of my hearing range had been disappearing. I did not really feel that I needed hearing aids. Had I not been a bird watcher, I’d have just increased the volume of the TV. It had got to the stage, however, where I could no longer rely on my ears to do my survey work. The Breeding Bird Survey was OK, because my wife Jenny and I always work together and her ears are a lot better than mine. However, observations from my daily walks around my local patch, when I fill in BTO BirdTrack lists, were probably starting to get a bit less reliable, especially if a bullfinch chose to call on my right, rather than my left.

Having Jenny alongside me highlighted that it was taking me longer to pick up a mix of calls – distant green woodpeckers were a problem, but I could still pick out the high-pitched calls of treecreepers. Hearing loss is different for all of us; my issues with the range around 4 kHz seem to take out a particular suite of species, which made sense when I chatted with Geoff Sample, who produces CDs of birdsong. I wondered if I had been deluding myself about the last couple of years of BirdTrack lists. In a thought-provoking article in British Birds magazine a few years ago, the eminent ornithologist Richard Porter not only questioned his own records, but went on to express concern about the indices of bird abundance and the atlases of distributions to which many of us contribute.

“With an ageing BTO membership and therefore, presumably, an ageing voluntary survey workforce,” says Richard, “how does this affect our survey results? Certainly I can no longer trust my records if listening for songs and calls is required, and I’d hate to think that some species seem to be becoming rarer simply because we can’t hear them! It would be interesting to know whether the age ‘signal’ can be isolated from any long-term survey results.” The BTO’s associate director for monitoring, Andy Musgrove, responded to Richard’s concerns, explaining how biases might be detected, and provided some evidence that the age of observers is probably not changing much. Since that article, the BTO has amended the Breeding Bird Survey process, in that participants are asked to note how far away birds were when they were detected. Presumably, it will be possible to check whether in the past I picked up most of my blue tits when they were over 25m away, but that these days 75 per cent of my observations are within 25m. If the changes are too marked, I guess that my data will be discarded.

A great deal has been written about connecting people to nature. It is widely agreed that there are health benefits, but conservation organisations also understand that society only values things that it appreciates. So, for instance, if we want local councils to protect scrubby areas that provide homes for nightingales, then we need decision-makers and the people who influence them to be sufficiently connected with nature to appreciate that nightingales are wonderful singers with cultural significance in our literary history. When I see teenagers, or 20- and 30-somethings in a park, taking advantage of the green spaces set aside for us by 19th- and 20th-century planners, most are listening to the human voice. Instead of appreciating, or just noticing blackbirds and song thrushes, they are talking to friends and listening to music. Here’s a project for someone: let’s find out if society’s knowledge of birdsong is being lost. Can 60-year-olds recognize more species than 30-year-olds? If they do, then my guess is that they probably learnt the songs as children and they have stuck in their memories.

We need a simple suite of test species -I suggest robin, blackbird, chiffchaff, wren, house sparrow and mallard – which can be found in almost every part of the UK. To avoid putting off people who feel they don’t know any birdsongs, the songs could be wrapped up in a test of auditory recognition. As well as birds, a researcher could add in some well-known voices, a few distinctive human singers, a variety of musical instruments, some domesticated animals, etc. My guess is that more young people would be able to recognise Sir David Attenborough’s voice than could distinguish a goat from a sheep or a chiffchaff from a robin. It is not entirely a story of a lost generation of people appreciating birdsong, though There are growing numbers of keen young birdwatchers who are getting actively involved in the BTO’s surveys, encouraged by a strong presence on social media and through initiatives such as the youth nature network, A Focus on Nature (AFON).

Hopefully, these younger ears will replace worn-out ones and keep our monitoring surveys going. I was more concerned about the future of surveys 10 years ago than I am now. These days my worry is broader where is the wider societal appreciation of birdsong, and can we bring it back? Another couple of phrases from Mabey’s book strike a chord with me: “We constantly refer back to the natural world to try to discover who we are. Nature is the most potent metaphor to describe and explain our behaviour and feelings.” Is it heresy to suggest that we are more likely to explain how we feel these days by referring to a television series or a film? Do we ‘blossom like flowers’ or do we ‘go on a journey’ like a celebrity on BBC One’s Strictly Come Dancing? When we learn birdsong, phrasing is really important. My hearing aids are not perfect and so I am training myself to focus more on the way songs are delivered. When you next listen to robin and dunnock songs, both of which use similar frequencies, think about the way that the dunnock keeps going while the robin pauses all the time, as if waiting to be applauded.