Peregrines: Living In The Jungle Of The City

A fine mist rolls in from Lake Michigan. It is a grey morning in Chicago in spring 2015, and 28 floors up Dacey Arashiba is groggily following the smell of coffee. After pouring himself a cup he settles on his sofa for his morning ritual in front of the box. However, he’s not watching television, but a white plastic container hanging off his balcony railing that is occupied by the fastest animal in the world. A peregrine is incubating her four eggs. From her lofty ledge she has a stunning view of downtown Chicago, all gleaming steel, glass and concrete. T 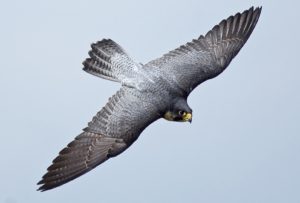 he male, or tiercel, is away hunting but Dacey expects that he’ll show up soon. Usually the female falcon spots his approach when he is no more than a distant dot in the sky, and lets out a volley of piercing cries in anticipation.

“The key to hosting breeding peregrines seems to be an untended window box,” Dacey jokes – it seems that his lazy gardening has for once paid off. As Dacey documented his observations of ‘Steve and Linda Perry’, as he calls his feathered neighbours, his social media accounts began to attract quite an audience. “I actually first noticed the peregrines about four years ago,” says Dacey. He explains that one morning he had walked into his kitchen and spotted something sitting outside the window. “It was a peregrine falcon!” His eyes light up. “The bird was just perched there, scanning the horizon. It turned its head and looked at me, and I looked at it. And then it flew away.”

From that point on Dacey occasionally saw the peregrines resting on his balcony, or swooping by as they hunted, until in 2014 their visits became more frequent. “The birds took a bit of interest in the window box,” he says, but unfortunately tenants in the surrounding apartments complained about the noise. “So the maintenance team scattered some repellent powder and they disappeared.” However, the rainy Chicago spring washed the powder away and two months later the falcons returned. When Dacey realised that they had laid eggs he got in touch with Mary Hennen, director of the Chicago Peregrine Program, and that was when he learned that the species was federally protected.

Though neither of the peregrines were ringed, Mary recognised them as a pair that had consistently been choosing unsuitable nest sites around the neighbourhood – including a roof gutter, where their nest had washed away as soon as the rains had come. So by the time the birds returned to Dacey’s balcony and made a scrape in his empty window box in June 2014, it was too late in the season. The clutch was weak and in July sadly failed. In March 2015 the same pair of peregrines came back once more. The female created a scrape in the still-untended window box, and laid four eggs. Luke and I arrived on n May and immediately took our seats on Dacey’s perfectly positioned sofa to begin our peregrine watch. Going from the laying dates – the first egg was laid on 13 April – the chicks were due to hatch any day.

The two adults followed a strict routine of swapping incubating duties every four hours or so, amid much excited calling. If the tiercel was late, the female would fly out from the nest to the opposite building in search of him. Whichever bird was off-duty would disappear to hunt and stretch its wings, frequently perching on the facing tower-block to preen or rest. On 15 May the first egg-crack appeared, but Luke and I only glimpsed it for a second while the female shifted position to let the male take over incubation responsibilities. We waited with bated breath and, sure enough, we had our first view of an eyas, or fluffy chick, at 5.30pm on 16 May.

The second chick hatched the following day, and we noticed that the female offered more meat to the elder one; peregrine chicks don’t tend to feed in their first 24 hours, instead depending on the remnant yolk ingested just before hatching. The following day the third chick hatched; again the female favoured the older two. We thought it unlikely that the fourth egg would hatch, because it had been laid some time after the others, but on 20 May we were delighted to see four chicks in the window box.

Making sure that a hungry brood receives enough food is a major challenge for peregrine parents. Fortunately this family had a head start. “Chicago’s location right on Lake Michigan makes for a major corridor for migration,” explains local ornithologist Josh Engel. The flyway brings a stream of thousands of songbirds heading north from their southerly wintering areas. “At the precise moment that peregrine eggs are hatching in Chicago, lots of migrant birds are around. They’re a really important food source.”

As in the UK, urban peregrines in North America often hunt migratory birds after dark, targeting a surprisingly wide range of waders and songbirds. At our Chicago nest, there seemed to be plenty of food to go round, with regular deliveries of red-winged blackbirds, swifts and pigeons. Responsibilities at the nest now shifted – the female brooded the nestlings on her own while the male took on the role of sole hunter. Often he would deliver prey to her in a dramatic mid-air food pass near the nest. On a few occasions when the male was not there to produce a meal on time and the female’s calls for him went unheeded, she flew around the corner to where they had a rooftop cache and returned with stored food. The chicks grew rapidly and after a fortnight were already four times their hatching size. At three weeks of age, their flight feathers and body contours were starting to develop nicely.