Beagles don’t mind having cats’ company, especially since they were bred to hunt in packs. Who knows, maybe they see cats as being part of their group? These pups are all about teamwork, so don’t be surprised if you notice your Beagle team up with your tiny cat to do some things around the house.

These pooches are very sociable, and they will make everyone in the house laugh and have a good time when they’re around. So don’t worry, you won’t have a fighting Tom and Jerry at home!

Golden Retrievers are one of the best dogs for cats, and their friendships are really cute! They are very kind, gentle, and empathetic, and it’s very easy for them to become friends with anyone, even with fancy cats that don’t really like company.

However, in order to be sure that there won’t be any problems between them, it’s better to train the pup to not chase the cat early on. Once that’s settled, we’re sure that your Golden Retriever and your kitty will be a perfect match!

Even though Bichon Frises are quite stubborn when you don’t give them something they want, they will make good playmates with cats. They are generally happy and entertaining, and they like to play a lot.

However, if your kitty is not very sociable and they prefer to be left alone, it might not get along with the pup’s happy and outgoing personality. But if the cat seems to enjoy the pooch’s company or even partake in some activities together, they will become best friends in no time!

Generally, Terriers and cats don’t seem to like each other very much, but the Boston Terrier is an exception to the rule. They like to play with cats and to be petted by them (as long as they’re gentle).

But there might be times when the pup will get bored, and they will like to chase the cat for a little while. Don’t worry, though. This is usually just a type of entertainment, nothing serious or dangerous.

Boston Terriers and cats will make good friends due to the fact that this dog breed is polite to animals in general, and they’re also very good-tempered. 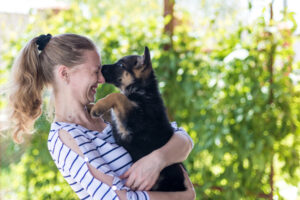 8 Signs Your Dog Really Does Trust You